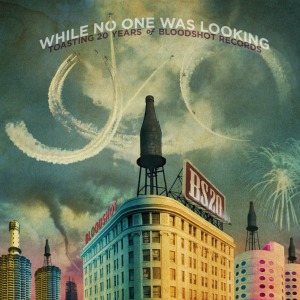 It’s a well-known fact that the soundtrack to Elizabethtown is one of my favorite soundtracks/playlists/albums/whathaveyou of all time.  And the crowning jewel on that soundtrack (and also from his album, I know guys, cut me some slack) – is “Come Pick Me Up” by Ryan Adams.  It’s Ryan Adams just doing what he does and the harmonica riffs make my soul hurt.

Superchunk was a staple in my musical catalogue my early “see, I listen to cool music” years – and when they made their re-emergence in 2013 I was the happiest little sunbeam on the planet.

So, imagine all the feelings that went rushing through my body when I saw this post on SPIN, which pointed to this post on Pitchfork, about Superchunk covering “Come Pick Me Up” in honor of Bloodshot Records upcoming 20th anniversary.  Spoiler alert: IT WAS A LOT OF FEELINGS.

The song is part of While No One Was Looking: Toasting 20 Years of Bloodshot Records, a collection of 38
musical acts covering songs from the label’s catalog, will be released on November 18. Seriously, this cover is so good it deserves a statue that somehow moves so is a person playing guitar who is probably a robot spray painted silver…ya feel me?

Take a listen for yourself here.